A video of a man consuming 10 pack of hot super packs noodle has surfaced online. 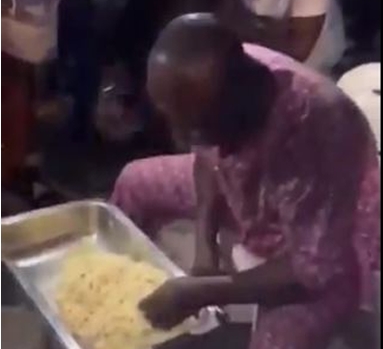 In the trending video, the was in an open door eatery somewhere in Lagos where he was cheered by people while he awaited the cook prepare 10 super pack of noodles.

When served, the unidentified man took his time while he ate from the chafing dish surrounded by onlookers and while they cheered in amazement. He finished the whole dish and went on to remove his top perhaps for more ventilation while someone fanned him.


In other news, Nollywood actress, Anita Joseph has ended the year in grand style as she wins a 6.8million Naira Honda Crosstour from Muma Gee’s Gleeoflife promo tagged, “Glee Santa Fair” a giveaway organized by for Vendors and shoppers of her hair products.

Gleeoflife is a hair products business located in Lekki and Ikeja, Lagos.

During the shuffling of tickets session, notable actresses were called upon to perform the raffle draw. Actress Iyabo Ojo and Anita Joseph who at the time did not know the lot will fall on her. A raffle draw was done and Anita’s phone number was called and surprisingly, she won the Crossover SUV!
Betting Tips on Whatsapp News Updates
Subscribe to Youtube
Related forums