A newly completed hall built by the Osun State government inside Ejigbo High School in Ejigbo, Osun state has collapsed. The building collapsed around 6am yesterday July 9th as workers were putting finishing touches to it in order to meet up with the Friday date for the commissioning. 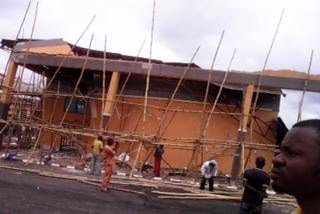 [ads4]
Osun State governor, Rauf Aregbesola, reacted to the incident via a statement he released through his media aide, Mr. Semiu Okanlawon.

"The Government of the State of Osun regrets to inform members of the public about the suspect incidence of the collapse of the main hall of the newly completed ultra-modern Ejigbo High School.

“Information at the disposal of the government indicates that the main hall which had been completed along with other classrooms of the school came down at about 6am Wednesday after a loud bang.

“As a responsible government, it is too early for us to say what the exact cause of the collapse is until we have full investigations and advice of professionals.

“However, it must be stated here that all necessary quality assurance tests were carried out to ensure structural durability and integrity of the project.

“Engineers from the Osun Ministry of Works and engineers from the Structural Engineering section of the Nigerian Society of Engineers have been dispatched to the site to establish the real cause of this unfortunate incident.”

Ohanaeze Chieftain Among Those Kidnapped In Kaduna On Friday – Shehu Sani

Sylvester Oromoni: I Would Have Burnt Down The School By Now If I'm The Mother - Alaafin of Oyo's Estranged Wife Queen Ola