A 15 year old primary six pupil by name Uchenna Iyike reportedly went mad in the house where he was living as a house help to one Mrs Nneka Ikeme at No 48b Falokun street Abule Egba in Lagos state.

Please read the shocking story and pics as shared by Emeka Odogwu of Odogwusblog:
According to Joy Iyike, Uchenna's elder sister, her brother was taken to Lagos by Nneka's husband Mr Chigozie Ikeme to assist his wife in the business of selling pprovisions around March last year with nothing wrong with him health wise.

They were living at Abule Egba until last week when she got a phone call from Nneka that her brother was having health issues. 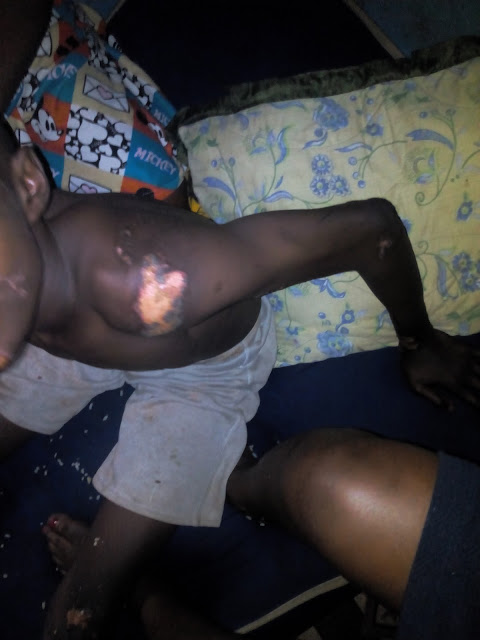 Joy stated that she is working at a hotel in Ogidi where Mr Chigozie Ikeme serves as themanager and some how along the line Mr Okeke requested that he wants a house help who could assist his wife in business at her provision store in Lagos,
thus she brought Uchenna and Ikeme took him to Lagos and enrolled him at Army Children School Abule Egba as he began to serve his wife as house help.

Joy said Uchenna lived until last week when she got a telephone call from Nneka telling her that his brother is having problem and has been referred to a near by hospital.

She said that when she got to Lagos, she met his brother at a hospital called Mercy Maternity hospital with injury all over her body adding that the hospital workers told her that he was violent and that they have tested him of malaria and typhoid fever and gave him treatment but to avail.

Asked if the boy has had mental problem ever in his life or whether he is used to strange characters that suggested that he has problem upstairs, Joy said no, adding that Uchenna was once remarked by a pastor in their village as a very brilliant boy who would be great in life if nurtured well enough.

Meanwhile, an international human right activist in Ogidi who gave his name as Advocate Eric Okafor has called for police investigation of the matter saying that Uchenna may have sustained such myriad of injuries as a result of severe torture by her guardian, adding that such server torture could lead to mental disorder.

Okafor who works with Right to Life Enhancement Initiative in Geneva, Switzerland while insisting that police has to be invited to investigate the matter alleged that the boy could not have injured himself in such a wild manner without somebody raising alarm to attract external hands from the neighbourhood who could handle him no matter the level of violence he had to be.

"The boy could not have afflicted himself with such injuries all over his body, from head to toe including his back, everywhere is full of bloody marks, common sense tells us that something is wrong somewhere" Okafor added When contacted, Mr Ikeme said that Uchenna and his wife lived peacefully and nothing could have made the wife to attack the boy and injure him, adding that the people in the neighbourhood at Falokun street Abule Egba can bear witness that nobody touched Uchenna talk less of torturing him.

Speaking on telephone, the wife said that she treats Uchenna as her own son just like he treats her own children. Narrating how the ugly scene that led to injuries on Uchenna's body play out, she said that the boy suddenly stopped listening to him and started fighting himself and everything around him in the mid night adding that before she could know what was going on the boy had sustained injuries all over his body.
She said:

"Uchenna was sleeping in the same bed with Chinedu, my son that night, some how, i noticed that he was resting one of his legs on Chinedu and I tried to draw his attention and consequently he changed direction and started talking to himself, suddenly he became violent and started fighting himself inside the room.

I had to shout to draw the attention of my neighbours and we took him to the hospital and while he was receiving treatment, I called my husband and his sister who came down and took him to Ogidi for further treatment" Emeka Odogwu says he was told that police has been invited to investigate the matter but when contacted the divisional police officer DPO of Ogidi division ear police headquarters Mr Hassan Musa said he is not yet aware of the case.

Also contacted the public relation officer of the Anambra state police command DSP Okechukwu Ali also said that the command has not received any report in respect the matter.

As the time filling the report the Authority gathered that the sister, Joy with the help of Okafor and others is battling to get Uchenna his right frame of mind as they took him to Iyienu Mission Hospital for treatment but unfortunately
he is not responding to treatment as expected.
Betting Tips on Whatsapp News Updates
Subscribe to Youtube
Related forums