According to a popular Nairobi newspaper, this 64 year old woman have slept with 5000 men.

Born and partly raised in Tanzania, 64-year-old Rosemary Johns, a mother-of-8, went to Nairobi, Kenya, where the hard life forced her into commercial sex in 1984. She got married at 16, but after some time in marriage, her husband started neglecting her after she gave birth to five children.

Rosemary figures that she could serve up to 40 men on a good day and between 5 and 10 men on a bad day. The staunch baptised Christian who never misses church on Sunday, is considering to retire. 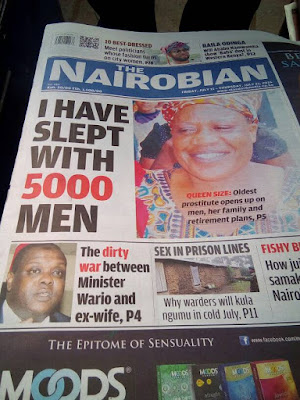 She says she had started small leso business after getting Ksh70,000 loan from a local bank, but fire razed down her house and shop in March, 2016, forcing her back to prostitution. She said: “It has been a long journey and I’ve slept with more than 5,000 men in more than 20 years.

Wizkid Celebrates His Third Baby Mama, Jada, As She Turns A Year Older

#EndSARS: Nigeria Fails To Deliver Justice For Victims Of Police Brutality Over A Year – Amnesty International